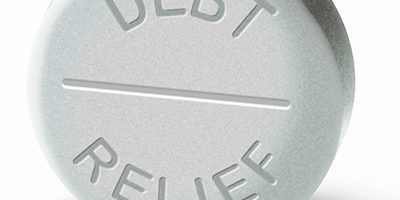 The only way to judicially “discharge” a debt is to complete a bankruptcy through either chapter 7 or chapter 13 of the U.S. Bankruptcy Act.

The final Order in such a proceeding, signed by the Bankruptcy Judge, orders that all debts listed by the debtor are “discharged”. There is much confusion as to the effectiveness of “debt consolidation” services offered continuously on the television.

Most of these services offer much, and deliver little, while demanding that the consumer/debtor pay a substantial amount “up front” as the service fee for such services.

The result was that after a long period of making payments the consumer/debtor discovered that NO money has been “set aside” to settle his or her debts. All the money had been going to the dent consolidation organizations as their “fee”.

Finally, Congress had to act to protect consumerism and passed legislation that prevents organizations from collecting their fees “up front”.

Further, in February, 2011, the Federal Trade Commission issued an alert to consumers advising them of the pitfalls of this type of deceptive marketing. Click the link below for a copy of that alert.